“Cause darling, I’m a nightmare dressed like a daydream.” 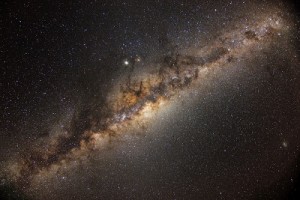 It was Independence Day in the US, and I had a peculiar urge come over me. For some reason, I just wasn’t in the mood for fireworks so much. Or, more accurately, I was really in the mood for some fantastic stargazing. So, on the morning of July 4, 2015, I checked the weather for a place in northeast New Mexico, packed a little food, blankets and my hammock in the car and headed west by afternoon.

As I approached the lake in one of the many extremely rural spots in the United States, I was happy. I hadn’t been camping in some time, and it was nice to join the serenity of the outdoors. As it turns out, I chose a great place and time to take my little adventure. I only spotted four other parties at that lake, and as would be revealed later, none of them brought fireworks. I set up camp and read a little, between stealing glances at the beautiful scenery that lay all around me. All that was left was to wait for nightfall at one of the recognized ‘dark sky’ locations I’d finally visited.

Dusk did come, as is in its nature, and luckily the clouds broke for a couple of hours before huddling up to cover much of the sky later in the night. I decided to walk up to a better vantage point that I had seen on my drive in. It had a small sign that said “Starry Point” with a gate locked to keep out pesky vehicles, so I figured that was my sign, more literally than figuratively. After I defiantly drug one of the picnic tables out from under a covered area, I laid down on it to get a look at this sky I had missed for many months, if not years. Seeing all the constellations I used to be able to rattle off at the drop of a hat was phenomenal, and the evening was peaceful. I got what I came for.

After I was finished gawking at the naked sky, I started my small journey back to camp, when about halfway there, it occurred to me that I had been singing about 3 lines of the same song in my head the entire time. By my estimation, it had to be somewhere between 1,500 – 2,000 times by now. “Dude. ENOUGH!” I thought to myself.

“Cause darling, I’m a nightmare dressed like a daydream.” Fuck. Whatever…

I bring this up, not only to get the obvious Taylor Swift problem off my chest, but because I finally did get that song to stop long enough to ask myself, “Why is it so hard to quiet the mind sometimes?”

While my mind was silent, a fairly profound answer seemed to arrive so abruptly, it almost startled me as much as the cute little bunny I had surely pegged for a bear/coyote hybrid killing machine hiding in the bush along the trail, who, thankfully decided to wait to pounce on the next passerby.

We hate uncomfortable silences. And not just with strangers or even people we care deeply about.

But even amongst the company of the self.

If you know me well (actually nobody knows this – it’s just a good segue), you’ll know that I’m a pretty big fan of Eckhart Tolle. He can be a little drab in his writing at times (you should hear his audio books…zzzzzz), but his message about Being Present is one that I think everyone should undoubtedly understand and practice. He talks a lot about quieting the mind of incessant thinking and useless, repetitive, egoic thought processes. As simple of a concept as this may sound, its difficulty is level 11 when you get down to brass tacks.  If you’ve ever practiced meditation, you’ll recall the beginning when your mind was quiet for approximately 0.5 seconds and said, “Yea, I don’t like this – I’m going to think about what color I’d paint the ceiling if I had my own castle.” Quieting the mind is difficult.

And I think it’s [partly] because we don’t like uncomfortable silences.

But think about this for a minute: There ARE people with whom you have no problem hanging out with in very comfortable quiet for a very long time. Why?

It’s because the relationship you have is secure and comfortable. There aren’t any moments when you begin to think, “Oh no, I wonder how this person is judging me right now! I better fill the void to protect my ego.” You just sit there, trusting in each other that the two of you are simply ‘cool’. These relationships are more scarce than plentiful, but pretty much everyone has a few of them – at least with your own family members, and hopefully with a few close friends.

It’s the other people you aren’t intimate or uber-comfortable with that can’t survive long, uncomfortable silences. I contend that for many of us, our self is in this other group.

If I’m not able to sit in silence comfortably with someone – if I have to make an innocuous comment after 5 seconds about a recent baseball game – there’s something about our relationship, deep down, that isn’t completely comfortable.  This isn’t anything to get annoyed about, it’s difficult to establish that depth to a relationship in our society. What is a little annoying is that, statistically, I’m likely to have my own chattering mind in the same category as this other person. Forget annoying, it’s downright scary.

So many of us aren’t exactly comfortable with who we are inside. We’ve put so many masks on, we don’t remember what our true self even looks (or acts) like anymore. And it’s tough to be comfortable with someone you don’t know well.

Getting truly comfortable with ourselves is a tall task, to be sure. But, I think it’s one of the big hurdles we have to clear in order to be able to sit comfortably, in silence, with our own ego. As someone who has silenced his mind on many occasions, but still struggles to stay in the present with a comfortable internal silence, I can tell you that it is definitely a hurdle worth attacking.

Becoming that comfortable with yourself often takes some esteem work and even more confidence work. These are beyond the scope of this page, but I’m sure you have enough insight to move forward from here – should you be adequately compelled.  I truly hope you are.

Here’s a starter tip for you on being fully present: When you hear your mind blabbering on and on, take a second to stop and literally become ultra-observative about whatever is currently around you. Just look around slowly and notice as many intricacies about your environment as you can. Do this without judgment. So, instead of, “note to self: bunch of trees over there,” think, “Eight trees. Their bark looks pale, but their leaves are very dark green. I haven’t seen that shape of leaf in a long time. Look at all that shade they provide. Interesting how the wind is moving through them. How tall is the tallest one? I bet their roots go for 60 feet underground.” You get the idea.

Instead of casting judgment on the situation, just provide numerous, brief internal commentary on what you see. Instead of, “There’s too much damn traffic here. These drivers are the worst! I hate slow drivers, they’re gonna make me late,” try this: “There are a lot of cars here – more white ones than any other color. I wonder why they can afford to be so casual. Where are they all going?” It’s important not to add meaning to what you’re seeing, because that engages the ego, and starts a drawn out conversation about right, wrong, good and bad. That’s not what you’re going for – just be present and enjoy what is in front of you. In virtually every situation, there is beauty when you can calm the mind and enjoy the moment.

When you start to really feel comfortable with your mental self, deep down in the basement level of your psyche, it becomes easier to exist without your mind chattering to you about stupid, useless, trivial blather – let alone any unwavering song lyrics. I can promise you, that comfortable silence is worth all the stars in the darkest night sky.