I recently got ‘dumped’ by a friend. It hurt.

I’ve been writing on Project: Groovy for about 3 years or so, trying to help people better 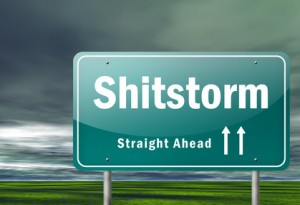 understand their emotional shitstorms by recounting lessons I’ve learned over the years and trying to spin them in a way that might resonate with a few people and flick an a-ha switch here or there. I have indeed been lucky enough to reach a few people who are willing to show their gratitude, and I’m extremely grateful for that blessing.

One of those people – let’s call him Jim – has gone through some tough times over the past few years, and Jim really seemed to unearth a lot of value from my babbling. Jim has sent me several messages thanking me for my insight, even if I only wrote something in a way that he hadn’t thought of before to help his own wisdom stick. He’s even sent me a couple of cards in the mail with phrases like, “no one has ever really helped me before like you have.” While I don’t feel entirely worthy of Jim’s kind words, I was very thankful for them. I thought, if I’m just helping this one person see things in a different [better] way, I’d say it’s all worthwhile. I sent Jim a copy of my book with an inscription, and he loved it. He even sent me a photo of a highlighted passage and some gratitude. That felt amazing to me.

One day, near the beginning of the year, I had a chance to hang out with this friend. We ate some pizza, had a few beers and talked about whatever came up for what must have been hours. I thought it was a great time, and I know I really enjoyed it. I thought ol’ Jim did too!

But after that night, and a couple random texts/emails sent by me, I kind of stopped hearing anything out of Jim, but it actually didn’t even occur to me at the time that anything might be wrong. Everyone is living their life, just cruising along navigating the next distraction, and I’m no different.

One day, Jim crossed my mind and I thought, “Hey I haven’t heard from that guy in a while – I wonder what’s up with him.” So I clicked over to Facebook and typed his name in the search only to find the “Add Friend” button mockingly staring back at me from the center of the screen. I’d be lying if I didn’t tell you that my heart sank a little.

So, I must have said or done something that made Jim feel it necessary to end our friendship. It makes me sad, but it’s honestly not the first time (nor the last) it has happened to any of us. The abruptness is perplexing and I am not entirely sure what I might have done to piss Jim off that blatantly, but the real part that hurts is the lack of feedback. The silent regression and dark FB deletion felt pretty harsh. I honestly would have preferred a hearty, “You said XYZ which pissed me off, so you can fuck off and suck one. Bye, asshole!” That’s closure, kids.

Anyway, the event left me in a huge funk for a couple of weeks. Don’t ask why I let it bother me so much, because I can’t tell you. I’m a little embarrassed to admit how long it has taken me to regain my equanimity, but hey…I’m human, ya know? I was angry. I was hurt. And I was resentful toward Jim.

And that’s what I really want to talk about today – that resentment. After the [lack of] altercation with Jim, I started having thoughts like: 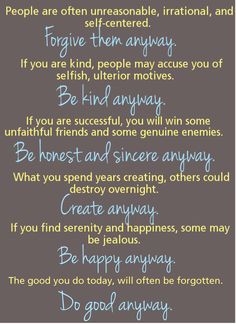 So, the results came in, and it turns out people are going to shit on you (at least from your perspective). You know what? Be kind anyway.

You’re going to put some stuff out there in the world, whether it is your work, your time, your skills, or your assistance…and some people aren’t going to like it. Some are going to vocally hate it. Offer your creativity anyway.

You are going to befriend a person(s) who was initially a stranger, and they’re ultimately going to screw you over in some minor or major way. Befriend strangers anyway.

It’s true that if you oh-so-vulnerably put your heart out there in a romantic setting, that you’re usually going to waste some of your life and it’s going to get another crack in it. Put it out there anyway.

The rewards aren’t why we perform the kind actions anyway. If that’s how you’re looking at it, then you’ve got it all wrong (just like I did). We’re kind because it’s the right thing to do. Being kind fills your heart with joy and gratitude (don’t forget about all that if the end result goes south – that joy and gratitude were still real). If you’re trying to help people using something you can offer the world, someone will find tremendous value in it (even if most don’t or that person changes their mind later).

Don’t forget a major lesson that I did forget for a time: Be kind anyway.