I have a good friend with whom I spent about 10 years growing up together in elementary/high school. She lost her 17-year-old daughter a few days ago in an accident. My son is currently 18 years old and I’m having a lot of trouble putting myself in her shoes.

If you have any children, perhaps you want to stop reading for a moment to put that in real perspective…

She mentioned some things on social media soon after – that aren’t uncommon – but struck a chord with me. Paraphrasing, she said, “I should have told her I loved her more often. I regret not doing more things for her and giving her more things she deserved.” I think we all feel this way about our loved ones but we almost never get the wake-up call before it’s too late. I feel an immense amount of sympathy for my friend.

Without trivializing that heavy statement, I’d really like to call attention to the way she said what she did. She told us what she wishes she would have done, not necessarily how she regrets who she is. I can’t speak for her feelings, regrets, wishes or heartache, but I think this is an important distinction.

Too often, people attach their identity to what they do, or how they act. We shouldn’t. Doing something, even repetitively for years, doesn’t make you anything in particular. You just are, and that was just a thing you did. Ok, this shit’s already getting way out there, so let me try to bring it back down, yeah? 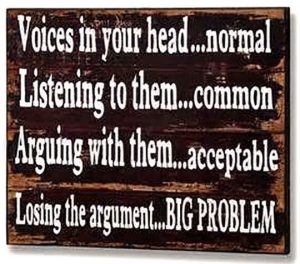 You know that little voice in your head that talks to you all day, every day? Some experts estimate this voice to tell you 20,000 to 70,000 things per day. That’s a lot of self-talk. They also estimate that 90% of these thoughts are the same ones you thought yesterday. If you’re listening to that much information, that repetitively, it’s hard to ignore. In fact, it’s very easy to buy into these messages, and that can shape your self-esteem, self-acceptance, and self-compassion (or lack thereof).

So, how does your mind speak to you when there’s any certain event that involves yourself? Let me give you a more specific example… When you knock over something, does your mind announce to you:

It matters. A lot.

The things that your mind tells you over and over are going to make their way into your subconscious eventually, whether you speak them out loud or say them inside your brain, and your subconscious is going to believe it because it’s like a computer – it doesn’t have a filter or a gatekeeper to advise whether or not a thought is helpful, unhelpful, even true or false. It just knows that if it hears a thought enough times in a row, it drops that thought in the ‘fact’ bin and begins operating from that assumption.

Let’s say you like to use the first format a lot. If you do, it’s probably because of how authority figures spoke to you when you were young. If your parents or teachers told you, “You are so clumsy, pay attention!” then you adopted that as a mantra that you need to repeat to yourself every time you do something clumsy. These figures told you that enough times that it was probably a ‘fact’ in your subconscious before long, and when they’re not there anymore to remind you, your mind takes over in place of the absent authority figure to make sure the mantra stays alive. It’s like that old saying, “You become the inner voice of your child later in life.”

The same holds true for the second version. If your teachers and parents told you, “that was a clumsy thing you did there,” then that becomes the format you likely use later into life and train your subconscious accordingly.

There’s a very important distinction in this seemingly simple similar vernacular: ARE vs. DO.

Who You ARE versus What You DO

When you tell yourself that you ARE something, you attach it to your identity as a human being. Just like you attach other things to your identity, like gender, occupation, etc. I AM a male. I AM an engineer. I AM clumsy. Therefore I act accordingly. I act like a male, an engineer and a klutz.

However, when you use the type of verbiage that indicates you DID something, it doesn’t necessarily indict you as BEING that thing. If instead, I say to myself, “that was a clumsy thing I did there,” then I’m not pigeonholing my identity as a person who IS always a klutz, I’m just a normal person who happened to do a clumsy thing.

Do you see the difference? I hope so because it’s important. Like I alluded to before, your subconscious gets trained and finally declares either, “OK, I am a klutz and will operate my life as such.” Or, it declares, “I’m a normal person who apparently does clumsy things occasionally.” This is huge.

I think I’ve belabored that point enough; you get the idea. =)

So, here’s what I really want to talk about: What judgments we make about ourselves versus what we do or don’t do. You know as well as I, that we’re all constantly judging situations, other people, and even ourselves. I think that the more we can separate our judgments from events and just let them be (neither good nor bad) the better, but I’ll leave that idea for another day. For now, I want to talk about how we likely judge ourselves constantly.

If your mind is anything like mine, you use the first type of communication with yourself most of the time. I hear a voice many, many times per day saying inside my head, “Ryan, you idiot,” “You are so stupid, why did you do that?” “Seriously? Is this your first day? You dipshit.” You know, cliché stuff you’d totally find inside a fortune cookie.  Occasionally, if I’m lucky, I catch myself and dispute the statement right then and there. I tell myself, “Hold on a sec, you’re not an idiot. You just did something that wasn’t very smart. But you are a smart guy. What can you learn from this?” And then I move on. I just want my subconscious to hear the other side of the story because whether you like it or not, he/she’s the one actually running the show.

That’s the best brief advice I’ve got for now to change the train’s direction on how you talk to yourself. I know it’s not much but it’s better than just taking all of the harsh self-critical judgments about who you are as facts.

I think the most important distinction I want to make here is the separation of:

Example time: Let’s say you would like to lose some weight. You decide you’re going to stop eating dessert as a start, maybe jog for 30 minutes each morning. Since you’re a human being and not a robot, you’re going to fuck up eventually. So, as soon as you finish your first piece of cheesecake during your new lifestyle, do you say, “I am so weak, I have no willpower.” or “Damn it, I screwed up on my diet. I can’t make these mistakes in the future if I want to reach my goals.”

Do you see how the first statement is an indictment of your character, that condemns you as a ‘bad’ person? Do you see how the second statement simply points out a couple of facts but doesn’t attack your identity? I believe we all need to get a lot better at knocking that first shit off and getting a lot more serious with the second shit. Ok cool – how?

When you make a mistake of any sort in life while trying to reach a goal, and you want to address yourself concerning this mistake, speak to who you ARE as you would speak to a close friend struggling with the same mistake.

I mean, how would you talk to your close friend who just confided their ‘massive cheesecake dilemma’ to you? I think most people get it backward. I would definitely use the first option with my friend, but when talking to myself, I often choose the second. Don’t be like me. Be cool to you. 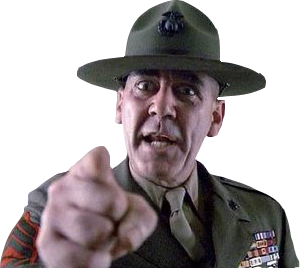 Now, when you make a mistake of any sort in life while trying to reach a goal, and you want to address yourself concerning this mistake, speak to what you DID as if you were a drill sergeant who just witnessed the same mistake.

How do you think a drill sergeant would talk to you about the mistake you made (remember: what you DID, not who you ARE)? He wouldn’t pussyfoot around the subject. He’d tell you how it is, and that’s that. If you don’t like the drill sergeant example, then think of how a truly supportive friend or family member might talk to you about what you’ve done. If they really care and are close enough to tell you the truth, they’ll tell you how it is. People who tell you the second version are not helping you. And that includes you telling you that stuff.

Moral of the story

It’s not easy, but most of life isn’t. Even if you don’t have any goals you want to accomplish (we all do, by the way) then at least take the first advice and stop being so mean to yourself. But if you want to accomplish something and find that you keep sabotaging yourself, get serious about your actions and don’t let yourself off the hook so damn easily!

Let’s practice: Okay Ryan, after rereading this post, you’re not necessarily a terrible writer, you just wrote a post that’s likely not that great. If you want to get better, you need to stop making excuses to avoid writing and put the practice in so you can get better. If writing good stuff isn’t important to you, then keep writing inconsistently, I don’t give a fuck. Either way, you’re still a pretty good dude who sometimes writes some okay stuff, and I dig that about you. =)

And… Tell your loved ones how you feel before it’s too late.

2 thoughts on “Lest Ye Be Judged”